The last 7 days has been like a rollercoaster! Literally! Last week, after some time off, I found myself on our morning shows. I love the morning. Its my body that’s not exactly sure what to do with it. For years I’ve been a night-shifter. Go to bed late. Get up late. From time to time I get assigned the early morning gig. Its like my world is turned upside down.

Okay … so I’m not good at waking up early. As long as I’m confessing I’m scared of heights. Really. And, I’m not a big fan of theme park rides that go round and round. So, what do my producers do? They send me on a ride that goes 301 feet into the air and, yep, goes round and round. Its like a merry-go-round on steroids. Its the WindSeeker at Knotts Berry Farm. New ride. I have to test it out or, as one producer told me, find a stunt double.

The stunt double idea sounded pretty good, but there was something inside of me pushing me to give this a shot. One of my technical guys said “sometimes you have to push the boundaries” while others suggested I confront my fears. All right! I did. Here are a few pictures from the camera mounted on the seat in front of me. I want to thank the folks at Knotts Berry Farm for sharing these with me. They are a reminder of how nervous I was at first and how relaxed I became the more I rode WindSeeker.

One thing that really helped was having someone to talk with and, in these pictures, that ride-buddy was Robb Alvey who owns Theme Park Review. By the way, you can find TPR on the web. Good reading! 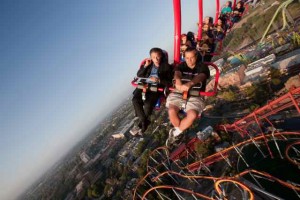 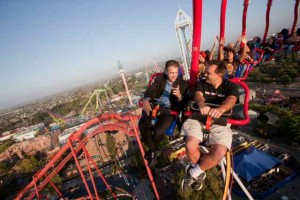 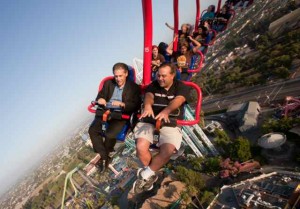 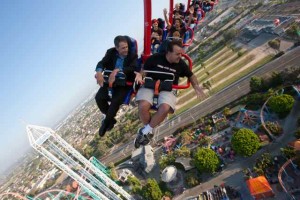 He’s lookin’ down! That Hal is really something!!! 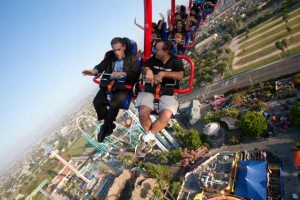 Now, I’m back on the ground and this week I’m working nights. My body says thanks! But, I know I’ll be back on days very soon to cover the trial of Dr. Conrad Murray. In some ways, that will probably be like a rollercoaster!

View all posts by Hal Eisner →

« The One-Paragraph Pitch
Transitioning to a new Career »